Classification of operational status is an important step for performance analysis of wind farms using SCADA (Supervisory Control and Data Acquisition) data, essentially time series data corresponding to physical readouts from the hardware. The main goal of the analysis is future energy production assessment and the identification of performance issues, though this will require using data from hundreds of millions of SCADA timepoint records in a typical wind farm. Until recently, classification of under-performance and different operational states has often been performed by a human analyst. Automatization of this process can save many working hours and provide additional insight into wind turbine operations. Training data is readily available as companies typically possess historical data from various farms where the power generation status has already been analyzed. Understanding the operational status can explain under-performance, for example by indicating when the turbine may require maintenance. This under-performance may be a consequence of power derating, blade icing, or other conditions. In order to automate this task, we use the knowledge of these under-performing operations within a supervised learning model, which is then employed to classify unlabeled data from various turbine types and farms.

The primary difficulty in automation lies in the transferability of models between farms. The elevation, local topography, climate, and proximity to human population can all affect the resulting power curve that the model will be trained upon. Training a model for one farm means that it will not produce reliable results for the next. 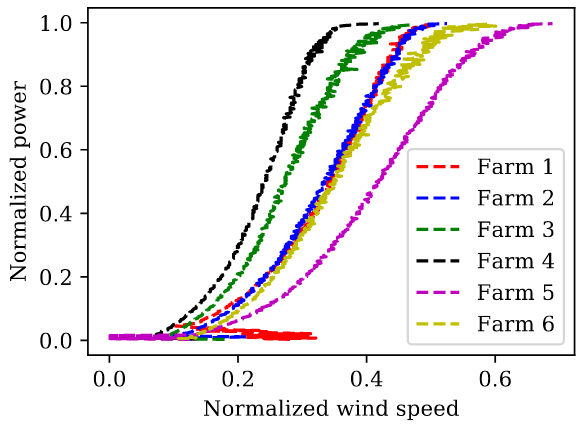 We tackled this problem in two ways. The first was to normalize the data on to one master power curve via an affine rescaling of the SCADA data, parameterized to minimize the KL divergence between the observed data and the reference curve. Differing wind farms can be transformed so that only one model needs to be trained.

The second technique was the use of a time point matrix as the input to a convolutional neural network. Rather than input the SCADA data at time \(t\), we spiral time points outward from the centre of a matrix and feed this into the neural network. This allows the model to “look back in time” and compare the current result relative to previous results. This gives a similar effect to a recurrent neural network, but makes it much simpler to train.

We developed a Python package acwind which takes the data as input and automatically reparameterizes and trains a model. The package requires PyTorch and can be used to train CNNs to classify the operational status of SCADA data. The package is currently in use by our industry partner DNV GL who have reported saving analysts’ time by over fifty percent.

Check out the article for more information and comparisons with other models such as a KNN or a simpler feed-forward neural network with baseline normalization. The code is also available as a repo, or by installation through pip via